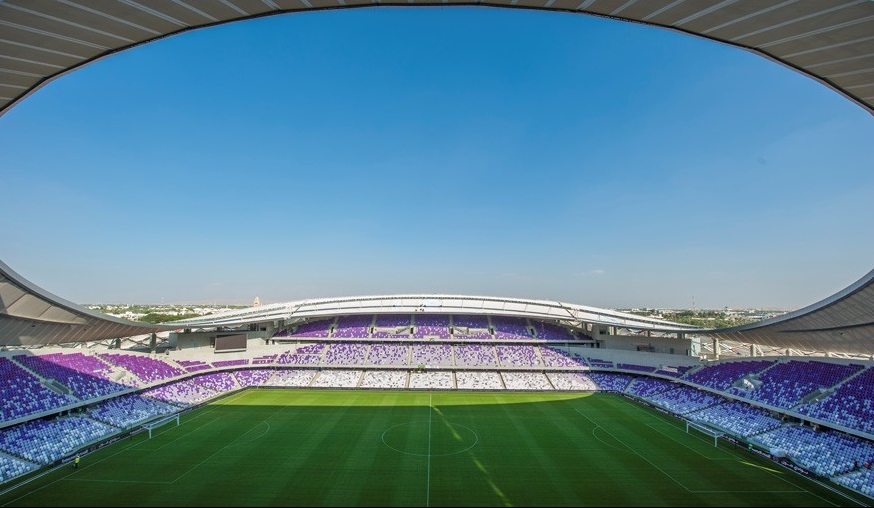 With 2018 FIFA Club World Cup coming up from December 12-22, the United Arab Emirates will be a focus of international football attention, and that will spill over into the new year, when the UAE hosts the AFC Asian Cup from 5 January to 1 February 2019.

The UAE will host the events at big football stadiums in the four biggest cities of Dubai, Sharjah, Abu Dhabi and Al Ain and large crowds will no doubt attend.

However, international events aside, the appetite for going to see live football locally remains relatively low compared to the more developed markets.

“The culture of the big game day with food and entertainment has not really emerged yet,” said Justin Frankel, Dubai-based Associate of HOK, who worked on the delivery of Al Ain’s 25,000-capacity Hazza bin Zayed (HBZ) Stadium, a benchmark venue in the UAE designed to facilitate the match day experience and atmosphere enjoyed in European and U.S. stadia.

“There are a number of reasons that the pro clubs have not managed to exploit the inherent potential of their live sports product.  Most stadia in the UAE have evolved out of community sports clubs with simple facilities, low fan expectations, and limited amenities. The clubs have also yet to fully take advantage of the expat community who make up the majority of the local population and who are hungry for good live sports experiences.  In addition, the match day experience has not evolved greatly to provide a broader appeal although some clubs are making significant efforts. ”

The development of the HBZ stadium for Al Ain FC is part of a broader initiative by the governing bodies, authorities and stakeholders to make clubs more self-sustaining and to improve the appeal of the UAE Proleague product.  This should lead to further venue improvements, enhancement of match day experiences and ultimately a better culture of attending live sports events.

The future of local fan engagement and facilities development in the region will be topics on the agenda at the iSportconnect 2018 Dubai Summit on November 26.

“We are currently seeing that arenas have broader appeal in the market with their capacity for hosting other attractions as well as sports,” Frankel told iSportconnect. “The flexibility and adaptability of these venues offer a better business case for developers leading to greater traction in the arena market over the development of new stadia.”

HOK designed the new 15,000-capacity arena on Yas Island, due for completion a year from now.

The new arena will be operated by local group Flash Entertainment, which will manage the FIFA Club World Cup.

There is also a new 17,000-capacity arena being built in Dubai, which will be operated by AEG Ogden.