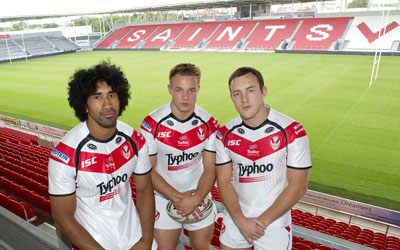 English Rugby League club, St Helens RFC have announced Typhoo will continue to be the club’s main kit sponsor for the next three seasons.

Following on from their sponsorship of the club over the last two years, the fastest growing brand in the tea category will once again feature on the front of the chest on all playing kit, replica shirts and trainingwear as well as the warm-up and coaching staff apparel.

Typhoo will also become main sponsors to the Players’ Lounge which will now be called the ‘Typhoo Hall of Fame’.

Since becoming sponsors, Typhoo – based in Merseyside – have served more than 15,000 branded cups of Typhoo Tea at home games and have created the ‘Typhoo Family Stand’ where young children can go with their parents and enjoy the game.

Keith Packer, Typhoo CEO, commented: “The first two years of our sponsorship of St. Helens has been a great partnership between Saints and Typhoo.

“The sponsorship has helped drive our brand awareness with our target market and we look forward to putting further OO into the relationship.”

Mike Rush, St. Helens CEO, added: “We are delighted to once again partner with such a proactive brand as Typhoo. Our partnership over the last two seasons has increased both parties’ brand awareness and we are excited about the future.

“Typhoo is a well-known, household brand and the fact they have extended the partnership not only augers well for St Helens but Rugby League as a whole.”