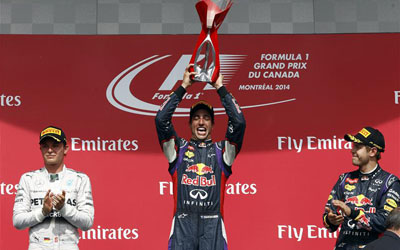 TSN and RDS, part of Bell Media, has extended their deal with the Formula One group to continue to showcase the Formula 1 Championship until 2019.

This is the second major rights deal announced by TSN and RDS today, as the Bell Media networks also confirmed a new, expanded partnership with the United States Golf Association for Canadian coverage of the U.S. Open.

With the new Formula 1 deal beginning next season, TSN and RDS will continue to broadcast all races, as well as qualifying and practice sessions and encore presentations.

“We are very pleased to have renewed our long-standing partnership with RDS and TSN and I look forward to continuing to work with them to bring Formula 1 racing to fans across Canada,” said Bernie Ecclestone, CEO, the Formula One group.

“Formula 1 has an incredibly wide, loyal and passionate Canadian fan base, and we are thrilled to extend the wonderfully successful partnership we have had with the Formula 1 team for more than 20 years. This extension speaks volumes about the meaningful relationships we build with our partners and the world-class spotlight we shine on Formula 1,” said Gerry Frappier, President of RDS. “This agreement also underscores our status as Canada’s leading sports networks and bolsters our commitment to bring Canadians the most prestigious events in sports.”