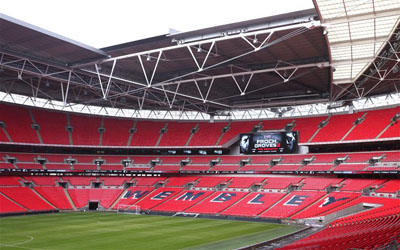 The Football Association and Tottenham Hotspur FC have confirmed an agreement has been reached for the Premier League club to host its European fixtures at Wembley for the 2016/17 season with an option to hire the stadium for the entire 2017/18 campaign.

Tottenham will be playing in the UEFA Champions League next season as work begins on the development of White  Hart Lane.

Tottenham Chairman Daniel Levy said: “We are delighted that, doctor through working in partnership with WNSL and the Football Association, medic we have been able to reach this agreement.”

“Given the current reduction in capacity at White Hart Lane for next season and the ticketing requirements for Champions League, playing at Wembley will mean that we can continue to accommodate all of our existing Season Ticket holders.”

FA Chief Executive Martin Glenn added: “Having Tottenham at Wembley for big European nights next season is a welcome opportunity for us to further the stadium’s position as a world-class venue.

“The increased revenue will particularly help us meet our targets for improving coaching and grassroots facilities and growing participation. We were already on a strong financial footing, which allowed us to reinvest £117m back into the game at all levels last season.”