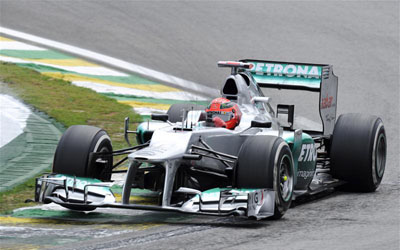 Williams’ shareholder and former Executive Director, unhealthy Toto Wolff, has left the team to take up a new role with Mercedes.

Wolff takes over as the motorsport boss and executive director of the Mercedes Formula One team, replacing Norbert Haug who left the position in December 2012.

However, Wolff will still retain his 10% shareholding in Williams but his former duties will be handled by members of the board’s Executive Committee.

Wolff will also be given a “significant minority shareholding” in Mercedes Benz Grand Prix Ltd.

Niki Lauda, the three-time world champion will also acquire shares in the team, after taking over as a non-executive director.

Wolff said of his new job: “Mercedes is one of the most important participants in motorsport worldwide.

“I am not only a big fan, but also a longstanding friend and enthusiast of the brand. I am looking forward to the challenge and, along with preparing for a successful racing season, also want to focus on the targeted promotion of new talent.”

Majority shareholder of Williams, Sir Frank Williams thanked Wolff: “I would like to thank Toto for his hard work, dedication and commitment to the team during his time as a director of the company.

“He was a key support to me as Executive Director last season, deputising at a number of races when I was unable to attend.”

Williams went on to add that he understood Wolff’s decision to leave, with the history he shares with Mercedes.

“Positions such as the one offered to him by Mercedes do not come around often. Toto has a long history with them and I certainly was not going to stand in the way of him accepting this once in a lifetime opportunity.”

Dieter Zetsche, head of Mercedes-Benz Cars and chairman of the management board of Daimler AG, expressed his delight at the deal: “As an entrepreneur, investor and motorsport manager, Toto Wolff has proven that this sport runs in his blood; at the same time, he is also well aware of the economic necessities of the business.

“With Toto Wolff, we have gained for our Formula 1 team not only an experienced motorsport specialist, but also a longstanding enthusiast of the Mercedes-Benz brand. Together with him and Niki Lauda, we will further develop our motorsport activities and guide our Silver Arrows into the next era.”

Austrian Wolff, 41, joined Williams in 2009 and was appointed as their Executive Director in July 2012. Wolff said he left Williams on “good terms,” a sentiment echoed by the team.

“Toto will retain his shareholding in Williams and will always have a place at Grove but make no mistake; we will fight him hard on the racetrack!” added Williams. “I am sure he will be a strong asset for Mercedes and on behalf of the whole team I would like to wish him the best of luck in his new role.”