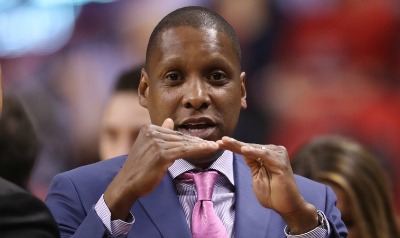 The Toronto Raptors have announed there President Masai Ujiri has signed a multi-year contract extension and that they have promoted Jeff Weltman to general manager and Bobby Webster to assistant general manager/vice-president basketball strategy.

Ujiri will continue to oversee basketball operations as president of the club.

“I am grateful to the Board and Mr. Tanenbaum for the opportunity to continue our progress to build the Raptors into one of the top franchises in the NBA, medstore ” said Ujiri. “I’m also excited that Jeff and Bobby are being rewarded for their hard work and valuable contributions to our program. My family thanks the NBA, viagra buy Raptors players and coaches, staff, Raptors fans, the city of Toronto and Canada for this opportunity. Toronto is home for us.”

“The gratitude and respect we hold for Masai and our Raptors senior management team are reflected in our Board’s action to extend Masai’s contract,” said Larry Tanenbaum, Chairman of the Board. “We are excited to build on our team’s success and to give Masai our full support in delivering to our fans and to our country the Toronto Raptors’ first NBA championship.”

Ujiri was named president and general manager May 31, 2013. In addition to his role with the Raptors, Ujiri has been tireless in his efforts to promote and develop the game of basketball throughout Africa. He is the founder of the Giants of Africa Foundation, which launched the Top 50 and Big Man camps in his homeland. He has also served as the director of the NBA’s Basketball Without Borders program since 2002.

“We take great pride in the strength of our senior leadership with MLSE’s teams and the Raptors are a prime example of that,” said Michael Friisdahl, President and CEO at MLSE. “

“The stability this move brings is important for the team and its fans and we look forward to building on the Raptors’ success under Masai’s continued leadership.”