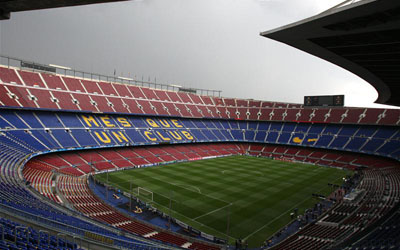 Top 14 Final to be Held at Barcelona’s Camp Nou

Barcelona’s Camp Nou stadium will host the final of the 2015-16 season of the top division of French club rugby union, therapy the Ligue Nationale de Rugby (LNR), diagnosis the governing body of the Top 14 has announced.

The game is scheduled for June 24, 2016 and will take place outside France for the first time due to the country staging the UEFA 2016 European Championships football tournament.

As a result of this, major French stadia will become unavailable for the Top 14 finale, which has usually been held at the Stade De France in Paris.

The Camp Nou has a capacity of 98,600 and will stage a rugby match for the first time, with the LNR hoping it will set a new attendance record

With key Euro 2016 games schedule for 25 & 26 June, the LNR and French Rugby Federation (FFR) decided to stage the match on the evening of Friday 24th June to gain maximum exposure for the occasion.

LNR president Paul Goze admitted that the Camp Nou wasn’t the only venue considered for the showpiece.

“Many European cities were competing,” he said.

“London with Twickenham and Wembley, as well as Rome, Milan and Barcelona. We studied the clubs that were finalists in the last 10 years and there is almost the same travel time for these clubs to Paris or Barcelona. Barcelona is only 180km from Perpignan.”