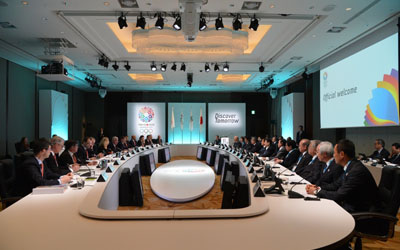 The International Olympic Committee’s (IOC) evaluation commission began a four-day inspection of Tokyo’s plans to host the 2020 Olympics on Monday.

Bid organizers are hoping to win over the International Olympic Committee after Tokyo failed in its bid for the 2016 Games, which went to Rio de Janeiro.

The IOC’s evaluation commission began a four-day inspection of Tokyo’s bid on Monday. IOC vice president Craig Reedie is leading the visit, which will be followed by trips later this month to Madrid and Istanbul, the other two cities vying to host the Olympics.

Abe offered the full support of the central government to host the games and recalled the powerful impact the 1964 Tokyo Olympics had on Japan and the region.

“The Olympic spirit was the same spirit with which Japan grew to its height,” he said in remarks to the visitors. “For the Japanese, the Olympic spirit became a mission that we must help the rest of Asia to grow.”

Boasting that Tokyo’s preparedness was “second to none,” Abe said the Olympic torch should return to Tokyo.

As Japan now faces the challenges that other countries will face — how to rejuvenate an aging society and keep the air clean — hosting the Olympics in 2020 will “inspire many others, just as Tokyo did before in 1964,” he said.

Tokyo organizers want to highlight the city’s safety and advanced infrastructure, while emphasizing that 28 out of the 33 competition venues will be within eight kilometers (five miles) of the Olympic Village, which is to be built on reclaimed land in Tokyo Bay.

During the visit, Tokyo organizers will provide explanations on 14 themes, such as the location of venues, security and accommodation. Monday’s presentations involved explanations of the vision for the games, venues, the Olympic Village and the Paralympics.

On Monday, the IOC commission visited 16 different venue locations — some yet to be built — and the proposed site of the Olympic Village.

“We completed the first day without a hitch. I’m satisfied. But we still have three days to go,” Takeda said.

Tokyo’s previous bid was hurt by a demonstration against hosting the Olympics during the evaluation commission’s visit, and organizers are hoping there will be no repeat this time.