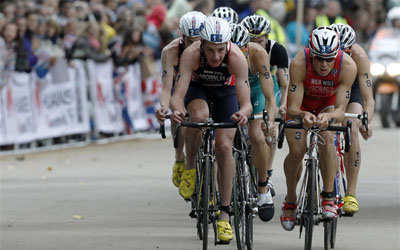 Global investment management firm Threadneedle Investments has signed on with the International Triathlon Union (ITU) as a financial sponsor of the World Triathlon Series.

The announcement follows Threadneedle’s successful partnership at the 2013 PruHealth World Triathlon Grand Final in London. The company introduced the inaugural Threadneedle Team Triathlon for its clients and employees who helped raise over £20,000, which was matched by the Threadneedle Foundation for Access Sport.

Last year, Threadneedle teamed up with Access Sport to develop Tri-3-Sportz, a legacy programme designed to break down barriers to triathlon and make the sport more accessible to young people in London.

Marisol Casado, ITU President and IOC Member, commented: “We are thrilled to grow our partnership with Threadneedle. Triathlon demands precision, focus, and drive, all of which Threadneedle exemplifies on a daily basis, making them an ideal and like-minded organisation with which to work.”

Gary Collins, Head of EMEA Sales, Wholesale for Threadneedle, commented: “We are pleased to confirm our three-year partnership with ITU. Triathlon is an exciting sport that is rapidly growing in popularity around the world.  Partnering with the ITU for the World Triathlon Series allows us to engage our clients and employees in key markets and support sports-related community organisations via the Threadneedle Foundation.”

Entering its sixth year in 2014, the ITU World Triathlon Series will showcase eight first-class events starting off in Auckland, New Zealand, followed by races in Cape Town, Yokohama, London, Chicago, Hamburg, Stockholm and will cap off the season with the World Triathlon Grand Final in Edmonton, Canada.