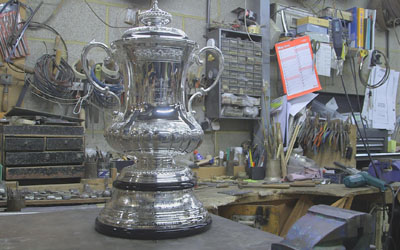 English luxury brand Thomas Lyte have revealed they have made only the third edition of the FA Cup trophy who the winners will lift this weekend.

The 2014 trophy will replace the 1992 edition, which in turn replaced the first iteration of the current design in 1911.

Made by world renowned silversmiths Thomas Lyte of London, the new trophy is made from 6.3kg of sterling silver and, standing at 61.5cm, is a perfect replica of the 1911 trophy. The 1992 trophy will remain in The FA’s possession at Wembley Stadium.

Alex Horne, General Secretary of The FA, said: “This is an historic moment in the proud 143-year history of The FA Cup.  This is only the third version of the iconic trophy since 1911.

“The current trophy is fragile and is too delicate to continue to repair, so must be retired for these reasons.  However, it will remain cherished and will forever be an integral part of The FA Cup’s rich history, having been lifted by the likes of Roy Keane, Patrick Vieira, Sol Campbell, Steven Gerrard and Tony Adams.”

Kevin Baker, Chief Executive of Thomas Lyte, said: “After many years of restoring the previous trophy, we are honoured to be making the new FA Cup.  This sporting trophy is a national treasure, an icon of English football, and its heritage is embedded within the design and craft of the new trophy. Thomas Lyte prides itself on the skills of its expert silversmiths and this iconic symbol of competition and fair play couldn’t be in better hands.

“The FA Cup is a masterpiece of British silversmithing, hand crafted by Thomas Lyte’s Master Silversmith Kevin Williams, who is a Freeman of the Worshipful Company of Goldsmiths. Kevin is a world renowned craftsman, and understands the unique construction of The FA Cup, having restored the 1992 trophy for the past 18 years. Hand spun from Sterling 925 Silver, the trophy underwent the painstaking process of casting, hand chasing, hand engraving and polishing. Originally commissioned in 2013, over 250 craft hours have been used to make this stunning 2014 trophy.”

As official silversmiths, Thomas Lyte Silver, is one of the few remaining craftwork shops in the UK producing exquisite gold and silver trophies. The London workshops are responsible for designing and making trophies across the globe and are official restorers of silverware to Buckingham Palace.

Thomas Lyte has a strong affiliation with football globally. They design and make football trophies and awards across five continents. This commission marks the next step in their partnership with The FA and British football.

Arsenal will face Hull City for the right to raise the Cup on Saturday.