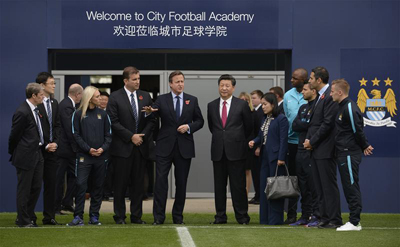 The windfall of Chinese cash pouring into Europe’s football clubs may be about more than just chasing glory and winning trophies by Simon Chadwick.

For the fans of some European football clubs, it must seem as though Christmas has come early. West Brom, Inter Milan, Granada, Aston Villa and Wolverhampton Wanderers have all passed into the hands of Chinese owners, immediately raising expectations among the fans of better times ahead for their beloved and in some cases beleaguered clubs.

China’s voracious appetite for acquiring European football clubs – part of a broader state-sanctioned push to become a global power in the world game – may well prove to a blessing for some fans and their clubs, if the ‘financial bonanza’ they anticipate ultimately transpires. From this, one gets the sense from many fans that they are prepared to accept Chinese investment at face value. That is, so long as there is a promise of money and success many fans are often largely unquestioning of new club owners.

The likes of Tony Xia at Aston Villa and the Fosun Group at Wolverhampton Wanderers have thus been welcomed with open arms. Such acceptance, it seems, is however premised on a noughties notion of football club ownership. This type of ownership is epitomised by Roman Abramovich’s time at Chelsea. It still is not clear why the Russian bought the club, but so long as he keeps on spending and the team keeps on winning, then many fans will remain happy.

But this is no longer the noughties, and the sugar-daddy days of seemingly aimless or vanity-driven football club purchases have gone. This is one reason why football fans across Europe should be rather more guarded in their responses to the sudden influx of Chinese investment.

Some fans almost instinctively frame Chinese investors as being corrupt. Indeed, common perceptions of China among Europeans are often laden with suspicions that Chinese business people are untrustworthy or somehow engaged in illegal or immoral activity. To a certain extent this reputation is warranted, although President Xi Jinping and state authorities in China have sought to eradicate corruption at all levels of Chinese business, including football.

Prevailing perceptions of Chinese business corruption are somewhat unfair, although hardly helped by the differing approaches to governance evident in Europe and in China.

Whatever the reality of corruption or the state of governance might be in China, it nevertheless remains important that European football fans are not easily seduced by an expectation of instant wealth for their clubs. After all, the likes of Xia, Wang Jianlin and Hui Wang are not local people with an intense passion for their local clubs. They are getting into football for very different reasons.

In simple terms, a club like Granada in Spain or Inter Milan in Italy is an acquisition, a property that is intended to add value to the Chinese buyer’s business portfolio. But the typical Chinese business portfolio is one that is deeply embedded in a state-led operating environment, where decisions are as likely to be political as they are based on rational economics. As I recently wrote here, being publicly seen to support state policy is a wise move on the part of a Chinese entrepreneur.

European fans should therefore be aware that what, for example, Fosun does at Wolves will be driven more by the offices and conventions of Chinese government than by fan sentiment on the terraces of the club’s stadium Molineux. Also, fans should remember that Chinese business culture does not operate on the basis of ‘something for nothing’. In fairness to China, businesses everywhere tend not to operate on this basis. However, China has proved to be particularly adept at playing what one might call ‘the long game’ in its business relationships.

At one level, this is a reflection of the principles of guanxi, which is a social phenomenon built upon mutual trust. Trust in Chinese business is crucial to success, and the basis upon which commercial relationships function. For the Chinese, trust is built-up over a long period through repeated engagement and interaction. At the heart of trust is reciprocation, which is essentially premised on the notion of ‘I give to you and you give to me’.

For example, Europe’s football fans would be wise to reflect upon China’s use of stadium diplomacy over the last decade. While many people may think that China is new to football, the country long ago proved that it is highly adept at using the sport in order to serve its national interests. As Rachel Will expertly outlined in theWorld Policy Journal, China has used sports stadium construction projects as the basis for securing access to key resources from across the globe.

In one case, Costa Rica was gifted a new national stadium worth US$100 million by the Chinese government. In another case, Antigua was awarded a US$60 million grant in order to create 20,000 new seats for the cricket World Cup. Yet it is in Africa where China has most vigorously pursued its goals, placing sport and stadia centre-stage of a resource acquisition strategy. Indeed, one is hard-pressed to find an African nation that hasn’t benefitted from China’s generosity.

In the case of Angola, which staged the African Cup of Nations in 2010, had it not been for Chinese help it is unlikely the country would have been ready for the tournament. It is no coincidence that Angola is one of Africa’s largest oil producing nations, and it is no surprise that in the years since the tournament China has become one of the world’s biggest purchasers of Angolan oil. Whether it is mineral resources, food or otherwise, the Chinese don’t invest for nothing.

The current spate of interest in English football clubs by prospective Chinese buyers should therefore be no surprise. Indeed, a recent article in The Guardian highlights the way in which football has been used by the British government to lure Chinese investors.

Over the last six years, former British Chancellor George Osborne actively courted Chinese inward investment as he drove forward his Northern Powerhouse agenda. One of the key enablers for this was Osborne’s HS2 rail project, which is planned to run from London to Birmingham and on to Manchester, Liverpool, Leeds and beyond.

In late 2015, Chinese Media Capital acquired a 13 per cent stake in Manchester City, a club at which Osborne has over the years been seen watching games. City’s stadium would be directly adjacent to the proposed HS2 route into Manchester. Aston Villa and Wolverhampton Wanderers are part of the Birmingham conurbation through which HS2 will also pass. Another local club, West Bromwich Albion, is also strongly rumoured to be on the verge of a Chinese takeover.

Follow the railway line up to Merseyside, and there are rumours too of Chinese interest in acquiring Liverpool. Then on to Leeds, and the story is the same. And in Sheffield. And in Hull. Surely it is only a matter of time before Newcastle United drifts across the Chinese investment radar?

There are likely to be some very big, highly lucrative construction, property development and related commercial opportunities that emerge from the proposed HS2 line. The Chinese know this.

As football fans head into the new European football season, those whose clubs are now owned by Chinese investors will no doubt by optimistically looking ahead. However, these fans need to be aware that, unlike them, their clubs’ new owners are likely to have their eyes on a much bigger prize than a league title.