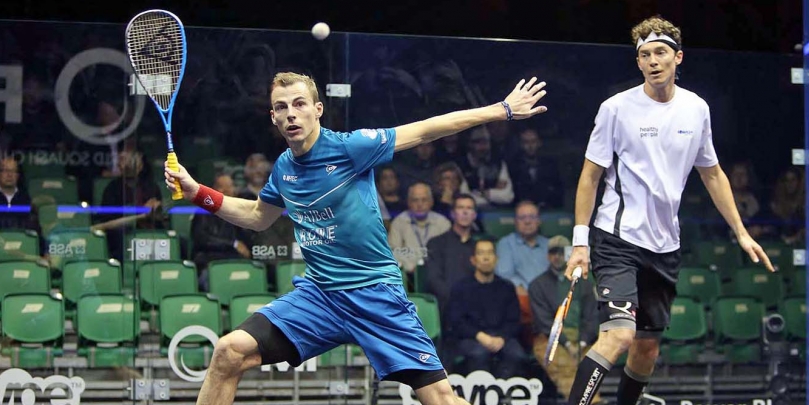 The State of Squash – with WSF CEO Andrew Shelley

iSportconnect caught up with the CEO of the World Squash Federation, Andrew Shelley, to discuss the state of the sport.
iSC – Andrew thanks for joining us. Generally, how is squash doing at the minute?
AS – Well we’ve had a knock back from the Olympics, we didn’t make it into 2020, which obviously was an aspiration of ours, but we will keep knocking on that door. Meanwhile the World Tour, the PSA tour, and Squash TV is doing superbly. The World Series finals were in the shadow of the Burj Khalifa in Dubai, which is the tallest building in the world, an iconic spot. So yes, squash is doing well. There are many countries that are also expanding. We’ve just had the European team championships in Poland, where squash is reputed to be the biggest growing sport in the country overall.
iSC – Missing out on the Olympics must be a real disappointment to the sport though?
AS – Yes, of course it is, we believe that we should be there because of the nature of the sport. However so do many other sports, nobody has a divine right to dine at the top table, but we’re still working at it.
iSC – People often say that the introduction of ‘show courts’ – with transparent walls, really took squash to another level, and is a good example that other sports can learn from. Would you agree?
AS -We didn’t get all glass courts, which started with Perspex, until the 80s. Having refined them with baked in dots so it’s one way vision, better lighting, white ball, coloured floors in the late 80s and into the 90s. Better cameras made a difference as well, so in the last 10 years the sport has moved on hugely, it’s very very watchable and very enjoyable. There are a large number of people playing Squash around the world; we’ve got 50,000 courts, people want to see top squash, they want the opportunity to not only see it, but to enjoy it.
iSC – As a sport, what challenges are you facing?
AS – The challenge that every sport has is there are so many other sports, recreations and e-sports. There are lots of other things going on! We have to make sure our product is what people want. That comes down to the club environment, the image of the sport, the marketing of the sport, the personalities. For us, when we market it, it’s athletic, it’s competitive, it’s exercise in a short space of time. It’s got a lot going for it, but it’s not a sport that necessarily you always talk about. We want people to talk about it more.
iSC – How do you plan on doing that?
AS – It’s a joint effort between the world federations, the tour, the nations, the players and the clubs; everybody has to be conscious of marketing and image. We as a sport, through the countries and the clubs, have great development initiatives; but development on its own is a waste of time, because you need to get the image right, so people stay.
It’s a combination of factors. By using modern media as well, everything coming together will bring us back to the state where we were some years ago – where we were growing everywhere, not just in some places.

iSC – Squash does seem to do well on modern media though, you often see great rallies appearing on Facebook and Twitter.
AS – Because a rally is a bitesize chunk, which is what people want, it’s great for social media. The personalities of the player are coming through to the squash market; we need them to come out in the general market even more than they do in some countries. We have the product. We just need to sell it.
iSC – Who needs to work harder on selling squash?
AS – We all have to push harder and everybody is. The players do get it, and they know that they are essentially in the entertainment business. They’re fantastic athletes, but people buy their services, they put in prize money because they want to see them play, the same way you would pay to see an entertainer. They get it, and for the most part are very good at it. It’s getting the clubs, the counties, the regions, the states, the countries, ourselves, all doing the same thing well.{jcomments on}