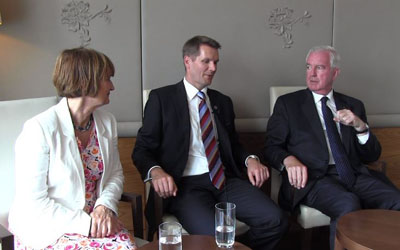 The “Great Race” to Bring the 2012 Olympic Games to London – The Inside Story, 10 Years on

London is currently remembering the ten year anniversary of two of the biggest events that have shaped the modern history of the iconic capital – the London 2012 Olympic Games Bid Victory, followed by the London bombings just a few hours later.

The former Secretary of State for Culture, Media and Sport and the Olympics, Tessa Jowell, has told iSportconnect TV that she had to convince former Chancellor and Prime Minister Gordon Brown, of the benefits of bringing the Games to London in her efforts to persuade the former Labor Government to initially bid for Games.

The London 2012 Olympic Games are now regarded by many
experts as one of the best planned, most commercially successful and responsible and transformational sporting events ever staged.

In a series of interviews with key players involved in the Olympic bid campaign,  iSportconnect TV provides the most up to date account of this remarkable story of sporting achievement and human spirit and endeavour that transformed Lindon and the UK over the past decade as we explore the impact of London Olympic Games Bid victory and the devastating London bombings.

Presented by Michael Pirrie, a senior member of both the London 2012 Olympic Bid and Organising committees,  this 2-part iSportconnect TV special, which begins on Friday 10 July, takes you back to the very origins of the Olympic bid as seen through the eyes of the key players who discuss, amongst other issues, the critical success factors behind London’s successful but against-the-odds Olympic bud win.

The featured line up includes Dame Tessa Jowell, then chairman of the British Olympic Association and IOC Executive Board member, Sir Craig Reedie, Sir Keith Mills, the head of the London 2012 Bid, Debbie Jevans, the first woman sports director  of an Olympic  Bid, and James Bulley , director of Legacy for the Bid committee.

Importantly, for the international community and audiences,  this iSportConnect TV special feature also explores the lessons and legacy of the London Bid for future cities around the world with dreams of hosting the Olympic Games, the worlds most sought after and prized sporting event.

Join us at iSportconnect TV for this fascinating insight into one of the biggest and most dramatic sporting campaigns and events.