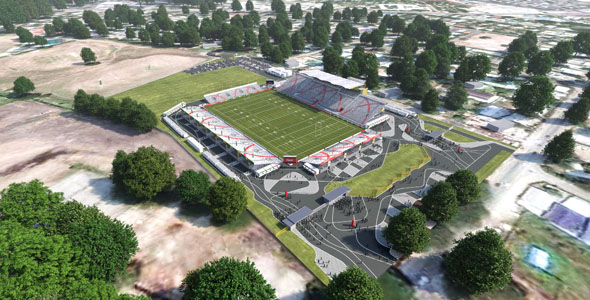 The Legacy of International Sporting Events in Young Nations – Populous

The European Games in Baku and the upcoming Pacific Games in Papua New Guinea have given  Populous’ Richard Breslin, Soaad Islam  and Shaun Gallagher a chance to consider the Legacy of International Sporting Events in Young Nations

International Sporting Events are a great opportunity to put young and emerging countries on the map, to build national pride and bring people together.

Populous has been working with two nations on opposite sides of the globe that are trying to do just that – Baku in Azerbaijan has successfully hosted the inaugural 2015 European Games this month (12-28 June) and Port Moresby in Papua New Guinea (PNG) will host the XV Pacific Games from 4-18 July.

In Baku, the Games have generated impressive development over the past 30 months, and in PNG, provided the impetus for a redevelopment programme which has included the first stage of the new National Football Stadium.

Both countries have their mission firmly directed at legacy, and the Games are central to plans not only for improvements to sporting infrastructure but also for the long term social benefits of both nations. Here’s Soaad Islam.

Baku in Azerbaijan, situated at the crossroads of Eastern Europe and Western Asia, attracted 6,000 athletes for the inaugural European Games (12-28 June). The Games were developed as a European equivalent to the Asian Games or Pan American Games, benefiting athletes and opening up new commercial and sporting opportunities.

Populous worked on three venues for these inaugural Baku Games, creating the event overlay, and designing the temporary and additional facilities at the National Gymnastics Arena (NGA), and the International Broadcast Centre (IBC).

We have also overseen the infrastructural and operational requirements at the Athletes and Media Village, ensuring that the delivery of these venues would achieve the standards that a world-class event like Baku 2015 needs.

A particular challenge of this project was coordinating the various operational and technical requirements demanded by world-class events, and adhering to appropriate construction methods and regulations within the relatively short timeline available. The entire organization process of the Games took place in just 30 months.

However, with challenges come opportunities. To make the best use of the site in the most efficient and effective manner, the key was designing the overlay components and other infrastructure to enhance the existing features and character of the site, while providing a clear and strategically planned venue.

Another positive effect of this project for Populous was the collaboration that has gone on between local firms, suppliers and international designers. The combining of knowledge and techniques between Populous and the Games’ organizers has been hugely beneficial for both parties.