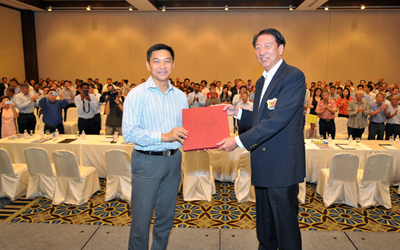 Tan, Singapore’s Minister for Manpower, takes over from the country’s Deputy Prime Minister Teo Chee Hean, who had been in the position since 1998.

The new President was the only candidate for the position and was elected at the SNOC Annual General Meeting at the Swissotel Merchant Court Hotel.

On his election, Tan noted the events the country was set to host, plus the new Sports Hub in the country.

Tan said: “The fact that we are hosting the SEA Games next year, provides a platform and opportunity for the new leadership in SNOC to work with you to realise our vision and dreams.

“I am looking forward to the Games, not just in terms of performance but in terms of hosting and rallying the people…Team Singapore is not just about the sportsmen but every Singaporean getting behind the team.

“[The SNOC] is in good shape and sports is evolving well. We will build on the strengths we have and continue to improve where we can.

“The Sports Hub is coming up and that’s always exciting when you have developments like that.”

Teo decided it was time for change at the SNOC, after being involved since 1994 when he was the Vice-President.

He told delegates: “I have decided not to seek re-election at this AGM. It is time that we have new leadership to take SNOC and sport in Singapore to new heights.”