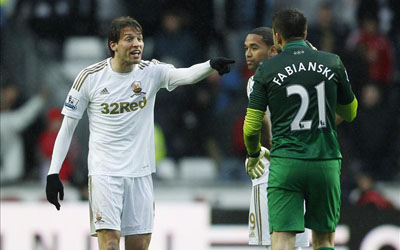 Gibraltar-based 32Red is the firm behind the online casino at 32Red.com and has served as the Welsh club’s primary shirt sponsor for four years. Its current deal was set to run until the conclusion of the 2013/14 season.

However, in a joint statement the pair explained that the decision had been taken in order to allow Swansea to ‘engage with third parties who may be able to assist in the physical development of the stadium and support the club in its next phase of growth’.

“It’s been a fantastic relationship with the Swans,” said Ed Ware, Chief Executive Officer for 32Red.

“Our association has coincided with Swansea City’s most successful period ever so far. We will look back on the partnership fondly and wish the club the very best of luck for the future.”

The original sponsorship deal with 32Red was signed in June 2009 when Swansea were a mid-table Championship club. They have since managed to secure promotion to the top-flight for only the second time in their history and celebrated their 100th birthday this season by winning the Capital One Cup.

“I’d like to place on record the club’s enormous thanks for the support that 32Red has given us over the last four years,” said Leigh Dineen, Vice-Chairman for Swansea City.

“It has been a pleasure to deal with and played an important factor in our progress. I feel we have some exciting opportunities in the marketplace and have agreed to conclude the agreement with 32Red one year early and on friendly terms.”