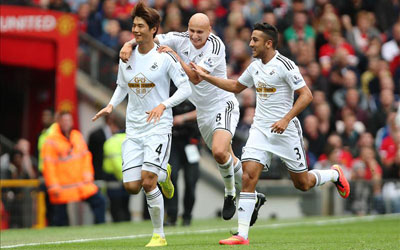 The Barclays Premier League club said in a statement they had spoken to “a number of parties” as they seek financing for planned expansion of the Liberty Stadium and a new training ground.

However, the club – which is 21 per cent owned by its supporters’ trust – said any deal would have to be right for all parties.

A club statement read: “As stated recently, the club is talking to a number of parties who have expressed an interest in possibly investing in the club in some form.

“This includes commercial activities, plus the possibility of assisting with the likes of stadium expansion and training ground developments.

“Part of that investment may eventually include the exchange of a ‘small’ percentage of club shares as an incentive to those interested parties.

“It must be stressed, however, that this is only a possibility and the club has not received any formal offers to date as discussions are only at an early stage.

“The board of directors believes they have proved over the years that the decisions they make are in the club’s and fans’ best interests.

“This philosophy is a priority and any future investment will only be accepted if it is right for the club and fans.

“Swansea City Football Club is in the fortunate position that it does not need to be forced into making any decisions it believes are not right and could be detrimental to the club’s current and future success.”