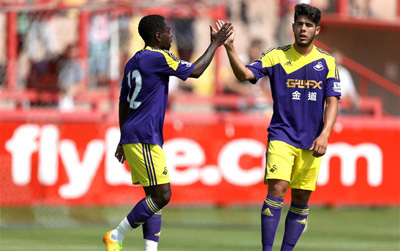 The deal is the largest in the Welsh club’s history and will see Goldenway’s branding on the front of the team’s shirt until the end of the 2015-16 campaign.

The new agreement, which was brokered by SportQuake, will see the pair try to bring the Swans closer to Premier League fans in Asia.

Swansea City vice-chairman, Leigh Dineen said: “We have developed an excellent working relationship with Goldenway over the past 12 months that has been extremely beneficial to both parties.

“We are not only honoured to be backed by one of the world’s fastest growing financial services providers, but their prestigious presence throughout Asia has helped lift the club’s global brand to a whole new level.’’

Goldenway Investment General Manager, Brian Tsui added: “I am proud that Goldenway, as a brand, is growing its portfolio of sports sponsorship globally. It is a valuable relationship with Swansea City.

“The association with such a passionate football club will definitely enhance our brand value and create a positive impact in driving our expansion globally.”

The news comes on the same day that Swansea learned they would be the first team to face Louis van Gaal’s Manchester United, as they travel to Old Trafford on the opening day of the 2014-15 Premier League season.