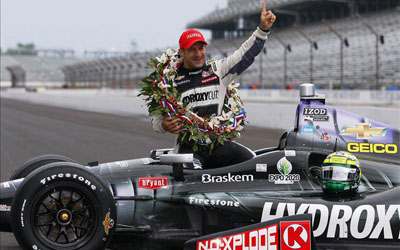 Recently-crowned Indianapolis 500 champion, Tony Kanaan has another reason to be happy after revealing he has extended his relationship with longtime Indy car sponsor Sunoco.

The car’s livery will feature the lead character from the upcoming DreamWorks Animation feature film “Turbo” about a snail whose dreams of competing in the Indianapolis 500 come true. It features the IZOD IndyCar Series and Indianapolis Motor Speedway.

“By leveraging its association with the upcoming DreamWorks feature film ‘Turbo,’ Sunoco provides the perfect activation platform to bring the excitement surrounding the film’s release directly to the fans at the racetrack,” said INDYCAR executive vice president of business development Greg Gruning.

Sunoco’s first Indy car race as a primary sponsor was Dec. 1, 1968, at Riverside, Calif. The No. 12 Sunoco Eagle driven by Mark Donohue for Penske Racing started fifth and finished 21st (broken right-front suspension). In 1972, the No. 66 Sunoco McLaren won the Indianapolis 500 – the first for Roger Penske, Donohue and Sunoco.

Sunoco, which has been INDYCAR’s Official Fuel and Convenience Store since 2010, returned to IndyCar racing as a primary sponsor in the 97th Indianapolis 500 on May 26 on the No. 60 Sunoco “Turbo” Panther Racing car driven by Townsend Bell.

“I am very proud and happy that Sunoco will be my primary sponsor for four upcoming races,” Kanaan said. “Along with Sunoco, ‘Turbo’ will be riding along with me in those events. My son, Leo, will be excited to see that, and I am very proud to be associated with what is sure to be a very special movie.

“Sunoco has a long heritage in Indy car racing beginning in the late 1960s and is a proven winner. I look forward to my association with them and hopefully get them to victory circle starting in Texas.”