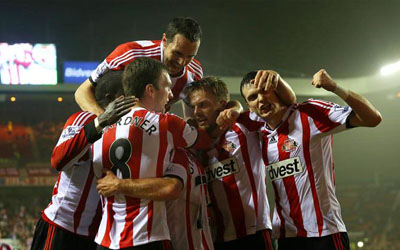 Sunderland AFC have extended their partnership with SPORTFIVE, arthritis the market leader in UK football perimeter advertising by installing a new state-of-the-art ADI LED system at the Stadium of Light.

SPORTFIVE installed their first pitch-level LED system at the home of Sunderland AFC in 2008 and the latest ADI system, medicine which will be in place for the Black Cats opening home Barclays Premier League game against Manchester United on Saturday 23 August, unhealthy will provide the very latest in high-impact, moving imagery.

The innovative LED screen technology exposes the club’s message and that of its key partners, to millions of domestic and international TV viewers, as well as over 40,000 fans in the stadium itself every game.

“The new system will provide Sunderland sponsors and SPORTFIVE LED advertising clients with outstanding exposure during the 2014-15 season and beyond.”

Sunderland AFC’s commercial director, Gary Hutchinson, added: “SPORTFIVE are the leaders in their field and we are delighted that we will be showcasing the very best LED technology at the Stadium of Light. The Barclays Premier League is shown in over 200 countries and the exposure such high-level technology gives to our club message is vital as we look to grow and develop Sunderland on the global stage.”