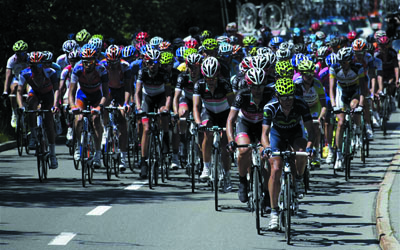 STORCK, allergy a confectionery producer and maker of nimm2 Lachgummi sweets, apoplectic has become the official co-sponsor of the 2014 Tour de Suisse after a deal was made with IMG subsidiary, viagra IMG Schweiz.

The partnership means that STORCK and nimm2 Lachgummi will both have a brand presence for the duration of the week-long race in June.

As part of the deal, nimm2 Lachgummi sweets will be available in the fan village, while several vehicles will accompany the publicity caravan, which travels the route of the race around an hour before its starts, allowing spectators lining the course to sample the sweets as well. In addition, STORCK will have advertising on perimeter boards both at the start and finish of the race.

Rolf Huser, Sports and Commercial Director of the Tour de Suisse, said: “The Tour de Suisse is travelling all over Switzerland. A decisive factor for STORCK therefore was the opportunity to hand out individual samples to a target group that is attractive both in terms of quality and quantity, and to be able to do so within nine days.”

Jürgen Krucker, Managing Director of IMG Schweiz, the official marketer of the Tour de Suisse, said: “We are pleased to have announced STORCK as a further partner for this year’s Tour de Suisse. Nimm2 is an iconic brand with a long history, much like the race itself, and is therefore a fitting association.”