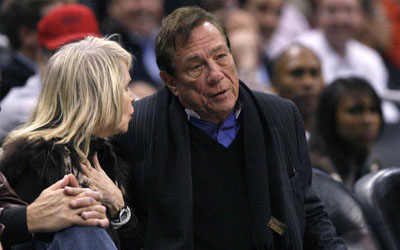 Donald Sterling and his lawyers have filed a motion to take the case of the Los Angeles Clippers sale to a federal court, stating that his medical privacy had been violated.

A probate court trial is set to start on Monday to find out if Sterling is mentally incapacitated and whether his estranged wife Shelly can take control of the family trust that owns the NBA franchise.

Shelly Sterling struck a deal with ex-Microsoft CEO Steve Ballmer to sell the team for US$2bn after Donald Sterling was recorded making racist remarks to his girlfriend.

A report on ESPN LA said that now, Donald Sterling’s attorneys have filed the notice and said airing his medical information in the probate case violates federal privacy laws.

They argue that Donald Sterling agreed to be examined on his mental competence under false pretences, but Shelly Strling’s attorney, Pierced O’Donnell said it was a “cowardly ploy.”

“Donald Sterling’s 11th-hour attempt to move the probate trial into the federal courts is a desperate act by a desperate man,” O’Donnell added in a statement.

Ballmer’s attorney, Adam Streisand said: “We will be filing emergency relief in federal court to undo this last desperate and frivolous attempt to block our trial from going forward Monday.”

However, Donald Sterling’s attorney Bobby Samini commented: “We feel strongly that this important issue should be addressed by the federal court at this time.

“While it has become popular to attack Donald Sterling for his regrettable comments, his right to privacy and to the protection of his medical records should not be acceptable collateral damage.”

The case is still set to go ahead in state probate court on Monday, until a decision is made by a federal judge.