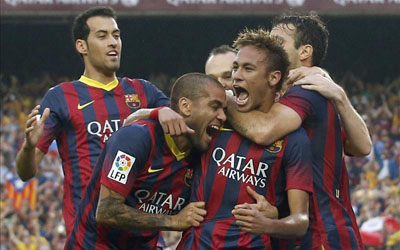 The association will also have a strong Stanley Black & Decker presence within all of the club’s distribution channels. The agreement will see activation through its power tool, hand tool and security brands, STANLEY, BLACK+DECKER, DeWALT and FACOM.

Scott Bannell, VP Brand Management & Licensing at Stanley Black & Decker, said: “This partnership with FC Barcelona demonstrates our continued investment and ongoing commitment to sport in general, and to the world of football in particular. It provides the perfect stage to highlight Stanley Black & Decker’s brand portfolio and engage with our customers by delivering exciting content and promotions across all global markets.

The agreement allows the STANLEY, BLACK+DECKER, DeWALT and FACOM brands to work on co-branded promotional items and campaigns with FC Barcelona, taking in everything from match tickets, signed merchandise and ‘meet & greets’ with players, to VIP travel experiences, personalised applications and mobile content. ”

Carles Vilarrubí, Institutional and International Vice President of FCBarcelona, stated this is “An alliance between two prestigious entities.” “For FC Barcelona it is a pleasure to unite our name with that of a leading global brand in the tools and electronic security sector like Stanley Black & Decker.

“This is a strategic alliance that goes much further than a traditional sponsorship deal, because it unites two internationally prestigious entities, both of which feature prominently in the everyday lives of so many homes around the world, who will seek to achieve common objectives and to create highly beneficial synergies. Barça fans and Stanley Black & Decker customers will be the main beneficiaries of this association.”