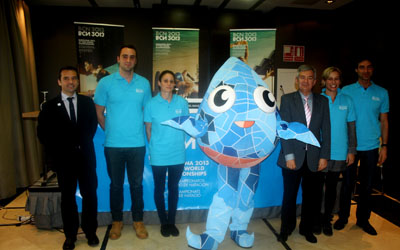 The 15th FINA World Swimming Championships, which take place in Barcelona from 19 July to 4 August, is set to boost Madrid’s 2020 Olympic Games bid, according to one of the event’s directors.

“We hope that these Championships show what Spain is capable of so that this dream becomes a reality. That’s what we are all working towards.”

Mr Pujalte was speaking at a press conference in the Spanish capital to set out his vision for the swimming meet.

Accompanying him at the presentation was the President of the Spanish Swimming Federation Fernando Carpena, Miki Oca, who is head coach of the female water polo team, and Ana Montero, the synchronised swimming chief among other sports men and women.

Alejandro Blanco, the Chairman of Madrid 2020, thanked him for the support, adding that he was certain the Championships would be a great success.

“The Swimming World Championships will demonstrate once again this country’s ability to organise the most prestigious sporting events.

“Barcelona 1992 is a great source of inspiration for us. One of the legacies of those Games is our experience in hosting tournaments on this scale. That isn’t limited to that wonderful city but extends to the whole of Spain.”