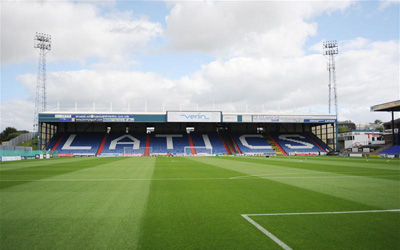 League One football club Oldham Athletic has signed a sponsorship agreement with Sports Direct that will see their home Boundary Park renamed.

The ground will now be known as SportsDirect.com Park, viagra whilst the sport shop’s logo will also appear on the team’s front of jersey.

Another element of the deal will see Sondico, sale pills a Sports Direct brand, discount take over from rivals JD Sports as the main kit supplier to the Latics.

David Newbury, SportsDirect.com Head of Brand Marketing, said: “We’re very pleased to be aligning our brand with a club as rich in history as Oldham. There’s a real sense of optimism around the club and we hope this sponsorship is one that will benefit everyone associated to the club and play a part in the club achieving its goals.

“We look forward to welcoming the fans to SportsDirect.com Park and into the new club shop.”

The five-year deal will start immediately, but will become clear to the public when the team face Premier League club Newcastle United in a pre-season friendly on July 15.

The Magpies are owned by Sports Direct owner Mike Ashley, who renamed the iconic St James’ Park, the Sports Direct Arena in 2011.

The criticism was fierce though and the ground reverted back to its original name when club sponsor Wonga joined as a partner.

Oldham Athletic Chairman, Simon Corney, said: “This is a landmark day for the football club. We are delighted to enter into a partnership of this magnitude with Sports Direct.

“There is a lot going on at the club, with the construction of the new stand and the opportunities this affords us.

“The fact we have attracted Sports Direct as our major commercial partner shows that we are moving the club forward.

“This deal is a first for Oldham Athletic and shows that the long-term future and stability of the club is at the forefront of our minds as we move forward. I’d like to thank supporters for their continued patience and support.”