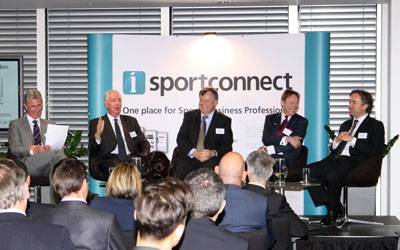 The event, in Question Time format, covered a range of pertinent topics ranging from the recent doping scandal in Australia, the exponential increase in sports broadcast and sponsorship rights. to the benefits of foreign investment in UK sport.

The event opened with a question about what the ‘game-changer’ in the sports industry was likely to be and the answers focused around digital advancements and innovations, particularly when it is around stadia and how to improve fans’ experience. Digital Replacement Technology was discussed as an interesting way for sponsors to capitalise in regions they don’t have a physical presence.

The conversation turned to discussing the value of broadcast rights and sponsorship rights and whether the industry was going to hit a ‘glass-ceiling’. The debate discussed sports from football to tennis and the recent significant deals being brokered in the industry (i.e. BT Vision).

Tim Ellerton: “There was a lot of passion in the room around broadcast rights and sponsorship rights and whether the bubble is about to burst – from tonight’s evidence, it would look like probably not, but time will tell.”

Sir Craig Reedie: “I enjoyed the interaction between the broadcast and sponsorship elements and the analogy of what is happening in the United States – we tend to think nationally, whereas in fact, there are a lot of very good messages from international conduct and international business that might be of value to your business here.”

The debate carried on with an interesting conversation around measurement and how to truly value your sponsorship – the consensus was the Advertising Equivalent Rate model was only part of assessing the true value of our sponsorship package.

Ian Ritchie summed up things nicely with this statement: “It is about balancing the objectives of your organisation – is it there to make profit (like a football club) or to aid a game as in governing bodies and invest into that sport (like the RFU). There is not a common solution for everybody because people have different objectives to what they are trying to achieve – that’s fine, as long as we recognise the difference.”

Founder and CEO of iSportconnect Sree Varma, said, “The iSportconnect Directors Club is going from strength-to-strength and we enjoyed our biggest ever attendance of sport industry professional at last night’s event. The feedback from delegates has been overwhelmingly positive and the Question Time style format continues to get the best insights out of our panellists. We look forward to welcoming the sports industry to future iSportconnect events.”

The debate rolls on…

Follow us on @iSportconnect and carry on the debate through  #iSCDirectorsClub.