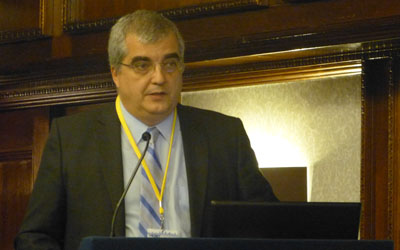 The executive director of communications of the Rio 2016 Olympic and Paralympic Games has backed the recent election results in .

President Dilma Rousseff was re-elected by a narrow margin on Sunday, ed though the country’s financial market wasn’t too impressed delivering disappointing results on Monday.

But speaking at the  : Bid to Win conference in  this week, nurse Mario Andrada (pictured, generic ed left) was happy to see the same administration in power to aid their preparations for the event.

“Having the same government makes things easier”, he said. “But  is a democracy, it’s cool to be in a democracy and it’s cool to have changes of powers when people decide to do so.

“In our case it makes our lives easier because we know the people, they know the project and we’ve been working with them for so long so it accelerates the process. But we would be happy anyway.”

Andrada will hope that Rouseff’s re-election won’t put off the private sector which he says is beginning to blossom once again in  because of the Games.

“, after being the capital for many years, lost a lot of economic potential,” he said. “Now companies are coming back and basing themselves in  to operate there. This is a legacy from the Games.”

The Rio 2016 Games officially open on August 5th 2016, so preparations are running at a high pace for the city to be ready on time.

Andrada denied though that their event would be beset with the same problems that meant construction projects for the 2014 FIFA World Cup in  were delayed.

“There is not a chance in the world we will not be ready, venue-wise” he said.

Stefan Lindeberg made his feelings clear about the bid procedures at the : Bid to Win conference, where he called for more cooperation between the IOC and NOC’s in the first phase of bidding, as well as a shortened period until the eventual decision is made.

The Swedish capital dropped out of the race to host the 2022 Winter Games in January after a lack of government support, despite a healthy amount of public encouragement.

In December, IOC president Thomas Bach is expected to produce recommendations for a far more collaborative approach to bidding and hosting as a result of the Agenda 2020 review.

This would help encourage cities to bid in the future without fear of being given “demands” the IOC.

“Obviously we have to and see what comes out of the Agenda 2020 process but I think if we see the changes being discussed then certainly we would want to bid for 2026,” Lindeberg said.

“The advantage then would be that everything should be much more clear for not only the people but for the politicians.

“It’s obvious you cannot ask them to sign a blank sheet of paper. But if they know what are the responsibilities and therefore the benefits then it can be a very different outlook.”

David Grevemberg, the new ceo of the Commonwealth Games Federation, saw Agenda 2020 as a “great opportunity” for the IOC and urged all sporting bodies to look inward at themselves.

In , he told iSportconnect: “I think world sport in general, each event needs to ask that question; are we an inclusive opportunity, or are we an exclusive opportunity and as such say ‘how do we live that? How do we create guidelines and standards that reflect that?’

“That’s something that’s quite important, whether that’s ticketing policies, or volunteer policies or how we position certain activity around the development of assets for a Games and the use of those assets, how do we actually make that work without losing the support that you garner from having a sponsorship programme.

“Because I think there is an element of exclusivity in sponsorship that needs to be protected but at the same time I think we should position it to the public, we need to create that alignment depending on the event.

“I think it’s a great opportunity for the IOC right now in terms of looking at the different manifestations of the Olympics and where it’s going and so forth, to reflect on these principles.”

Grevemberg and the Glasgow 2014 team recently passed on their expertise and advice to Gold Coast 2018, the next edition of the Commonwealth Games.The Debrief allowed for the experiences and recommendations from the Glasgow 2014 Games organisers to be passed on to the Gold Coast Organising Corporation (GOLDOC), City of  and the  and Australian governments.

This was then followed by a CGF coordination commission visit to the region. Chair of the commission, Bruce Robertson, confirmed that impressive progress has been made over the last 12 months since the previous meeting.