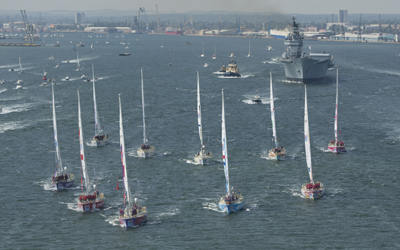 The Clipper Round the World Yacht Race has announced it will partner with South Beach Yacht Club (SBYC) to make it the official host of the race fleet when it calls into San Francisco next April as part of its 40, sales 000 miles, 11 month, route around the world, starting from London on 1 September 2013 and returning there in July 2014.

The Clipper Race is unique in that it trains amateurs to take on the world’s most challenging oceans; crew come from all walks of life, are aged 18 to 70 plus, and nearly half are women. This will be the ninth edition of the unique global which was established in 1996 by yachting legend Sir Robin Knox-Johnston, the first person to sail solo, non-stop, around the world in 1968-9.

Sir Robin said: “I am really pleased that the South Beach Yacht Club is to be our official host. I know that their members are very keen racers and our crews will enjoy meeting them and enjoying the excellent facilities. It is a good location and we look forward to introducing our international sponsors to the city and the wider Bay area. Plus there’ll be some great sailing opportunities for our partners and their guests.”

Bill Adams, Vice Commodore of SBYC says he is looking forward to hosting the Clipper Race: “The fleet is likely to be berthed around Pier 40 and there will be a rota of open boats so that the public and yacht club members can see what life is like aboard an ocean racing yacht. The new third generation Clipper 70 yachts look very exciting.

“The race will also make a significant economic impact on the city in terms of the hundreds of crew, officials, sponsors and fans supporting the event. This is the premier amateur sailing event in the world.”