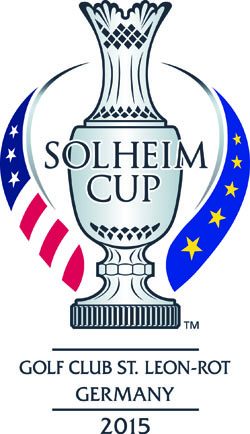 The Ladies European Tour (LET) and LPGA have unveiled the new official Solheim Cup logo ahead of the matches at Golf Club St Leon-Rot, abortion near Heidelberg, Germany, on September 18-20, 2015.

This is the first time in the event’s 24-year history that a new logo has been introduced, with the iconic cup flanked by the European and United States flags to visually express the event’s strong trans-Atlantic rivalry.

The new logo was developed in joint consultation with PING CEO and Chairman John A. Solheim, whose parents Karsten and Louise established The Solheim Cup with the LET and LPGA in 1990.

Speaking at the launch of the logo in Germany, with a year to go until the matches, Solheim commented: “The new Solheim Cup logo represents a continuation of the tradition our family proudly started nearly 25 years ago. It symbolizes the honor and pride that come with representing your country in the spirit of competition and inspires the next generation of women golfers who hope to someday put their name in the Solheim Cup record book.”

LET CEO Ivan Khodabakhsh added: “The Solheim Cup is a global sports event with a rich history of world class golf and unforgettable drama. With this being the first staging of the contest in Germany, we wanted a fresh and inspiring image to reflect the unique competition and connect with new audiences.”

LPGA Commissioner Mike Whan commented: “”The Solheim Cup and its excitement represents everything that players and fans truly love about this great game. This logo offers a contemporary take on the exciting history of the rivalry between Europe and the United States.”

The 2015 event, supported by global partners PING, SAP, Allianz and Rolex, marks the 14th time The Solheim Cup will be contested with the United States Team currently leading the series 8-5.