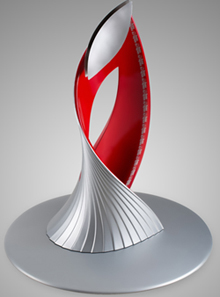 The concept of the Cauldron is similar to the Olympic Torch and is designed in an identical style.

It will be lit in culmination of each day’s festivities across the country during the Relay, with the Celebration Cauldron’s set to be produced and installed in all of the cities hosting end of day celebrations.

The President of the Sochi 2014 Organising Committee, Dmitry Chernyshenko, said: “The Celebration Cauldron of the Olympic Torch Relay is one of the main features of the Relay.

“The Cauldron will form a part of Games Legacy and will remind the people of each region of this historic event – the longest Torch Relay in the history of the Olympic Winter Games.”

The Olympic Torch Relay will begin its journey from Moscow on October 7, 2013.

Organisers estimate that 90% of the population will be within an hour’s drive of the Relay and 130 million residents will be able to play a direct part in the Relay.