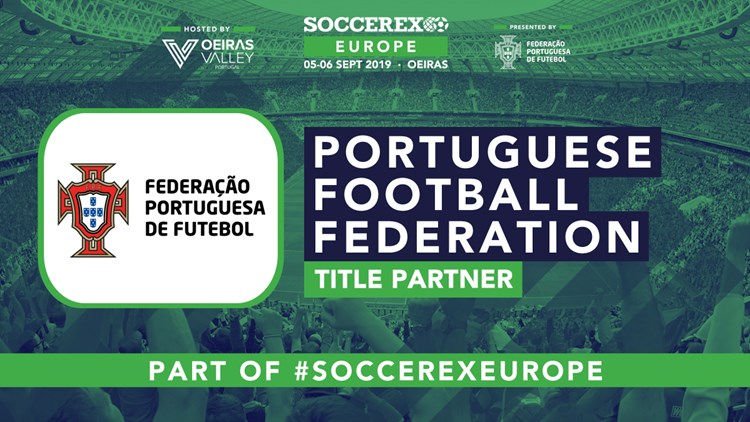 The Portuguese Football Federation (FPF) has become the Title Partner for Soccerex Europe, taking place from September 5-6 in Oeiras, Portugal.

Soccerex will work closely with the FPF in the preparation and production of the event, using its extensive network and experience to help coordinate the conference programme and put the Portuguese football community in touch with its international peers.

The FPF will collaborate on the programme and help define the conference concepts, using the knowledge and experience gained with the organisation of Football Talks, which were attended by figures such as Gianni Infantino, Aleksander Ceferin and Karl-Heinz Rummenigge.

FPF CEO, Tiago Craveiro, will share his ideas as part of an extensive Soccerex Europe programme focusing on the future of football across the continent.

The FPF’s collaboration with Soccerex will facilitate the participation of the Portuguese football community, allowing participants to benefit from various contacts and numerous business opportunities in this important international event, thus stimulating the growth of the football industry in the country.

The Managing Director of Soccerex, Philip Gegan, said: “It is a privilege for us to have the Portuguese Football Federation as the Title Partner of our event. Under the leadership of Fernando Gomes, the FPF has become synonymous with innovation and success, notably with their historic triumphs in the 2016 Euros, which were replicated by the U-17 and U-19 teams in their respective classes, the inaugural Nations League and with Beach Soccer and Futsal teams which have conquered Europe.”

“Having these qualities associated with Soccerex and being able to count on their support in the development of the event will only benefit the experience of participants, both Portuguese and from the wider football community”.

For more information on Soccerex Europe and how to purchase a delegate pass, please visit www.soccerex.com/europe.