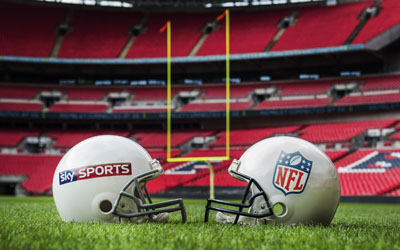 From 2015, Sky Sports viewers will be able to enjoy over 80 live fixtures a season, including up to five games each week of the regular season, the playoffs and Super Bowl.

Sky Sports’ coverage will also include all matches from the NFL’s International Series as teams travel to the UK for regular season match ups, which has seen sell out games at Wembley since 2007.

“The agreement means Sky Sports viewers can enjoy all the drama, excitement and unpredictability from the NFL until at least 2019.  Our partnership with the NFL spans two decades and we look forward to helping the sport continue its huge growth in popularity in the UK and Ireland for years to come.”

Managing Director of NFL UK Alistair Kirkwood said: “Sky Sports has been a fantastic partner for 20 years and we are delighted to have agreed a deal that will extend that partnership to a quarter of a century.

“Sky’s coverage of the NFL and their support for the sport in this country has been an important element of our growth and we look forward to seeing their coverage expand and develop over the next five years. It is fantastic for our fans to have long-term certainty about where they can watch so many NFL games and I am sure they will welcome this exciting news.”