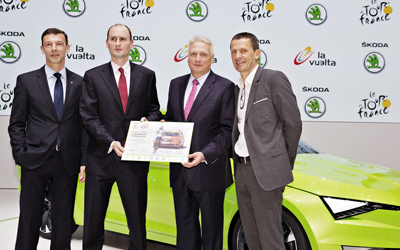 The Tour de France has officially confirmed that automobile company Skoda has renewed its top-tier sponsorship of the race.

The five year deal with the organising body Amaury Sports Organisation (ASO) was announced at the Geneva Motorshow, viagra after being originally mentioned in February 2014.

The Czech firm has been a partner of the Tour de France since 2004 and their new deal will also include the Vuelta a Espana, another part of clycling’s three Grand Tours.

Skoda chief executive Dr Winfried Vahland said: “Through extending our engagement at the Tour de France and other famous classics, we reaffirm our close relationship with cycling.

“Škoda plans to grow further as an international volume brand in the coming years with the most comprehensive model campaign in corporate history. Our continued strong presence in cycling supports the long-term image and the international awareness of the brand.”

Christian Prudhomme, director of ASO cycling and director of the Tour de France added: “SKODA is for the international cycling for ten years a strong and reliable partner during the race my SKODA for me is more than just a car. He is also my office and the place where I spend most of the day.

“We are very pleased to continue our successful cooperation with the dynamically growing brand in the next five years.”

The new contract will run until 2018.