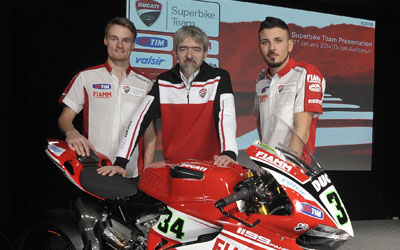 Shell have extended its technical partnership with Ducati to support the Italian manufacturer’s return to the World Superbike stage in an official capacity in 2014.

The agreement means Shell now has a clean sweep of all Ducati’s factory racing activities, as it already supplies Shell Advance motorcycle engine oil and Shell V-Power fuels to the Ducati Team and the Pramac Racing Team in MotoGP.

The 2014 season marks the resumption of a partnership that saw Shell partner Ducati to six World Superbike Riders’ Championship crowns and nine World Superbike Manufacturers’ titles, in a relationship that dates back to 1999.

The 2014 bikes will be ridden by Britain’s Chaz Davies and Italy’s Davide Giugliano in all 14 rounds of the SBK, starting at Australia’s Phillip Island Circuit on 23 February.

Kar Tai Koh, Global Brand Manager, Shell Advance, said: “We are very pleased that Ducati continues to entrust all its racing programmes to us with the recent news that it will be once again racing in the World Superbike Championship.”

Paolo Ciabatti, Sporting Director, Ducati Corse, added: “With Ducati running its own team in World Superbikes again, it was logical to have all our fuel and lubricant requirements under one roof, as Shell is already our Technical Partner in MotoGP. We are delighted to extend our agreement with Shell to cover this area of activity, which will thus allow synergies across both series. Shell are old friends and we know that we can count on their passion for racing and their technical expertise.”