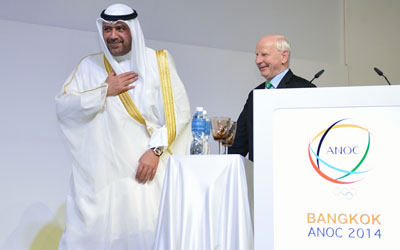 Sheikh Ahmad Al-Fahad Al-Sabah has been re-elected as the Association of National Olympic Committees (ANOC) President for 2014-2018 at the ANOC General Assembly in Bangkok following two successful years as interim president of the organisation.

During his two years as ANOC President, abortion Sheikh Ahmad Al-Fahad Al-Sabah has been part of a new era of ANOC which has seen a modernisation.

As well as updating the ANOC Constitution and creating nine ANOC Commissions and Working Groups to add further impetus to the process of reform, cialis the ANOC President has launched a new ANOC logo, website and social media platforms and moved ANOC into new headquarters in Lausanne.

The President and Senior-Vice President will now each serve a four year term having run unopposed in Bangkok.

ANOC President Sheikh Ahmad Al-Fahad Al-Sabah said: “I would like to thank all the NOCs for putting their trust and faith in me. It is a great honour to represent you as ANOC President.

“When I was elected as interim President in 2012 I made my objectives very clear: I wanted to reform, modernise and professionalise our organisation to offer the best possible support to the NOCs.

“We have come a very long way but there is always more that we can do. I hope that over the next four years we will be able to work together with all Olympic stakeholders to achieve the dreams and the goals of your organisations.”

The ANOC President also thanked the President of the IOC, the Thai authorities and the Prime Minister of the Kingdom of Thailand, for their presence and great support for the General Assembly.

President of the IOC Thomas Bach said:  “I would like to congratulate Sheikh Ahmad Al-Fahad Al-Sabah on his re-election. He has worked hard to modernise ANOC and provide the very best support to the National Olympic Committees.

“ANOC is a vital partner of the IOC and a key member of the Olympic Movement, together with Senior Vice-President Patrick Hickey I look forward to a close and fruitful cooperation.”

ANOC Senior Vice-President Patrick Hickey said: “I would like to sincerely thank everyone for the great support they have shown me. I am very humbled. As you know, I have always fought to represent the interests of the NOCs and will continue to do so.

“It is a great pleasure to serve as ANOC Senior Vice-President at a time when we have such a great relationship with the IFs. I thank the ANOC President for forging these strong relationships and I look forward to working with the IFs under the umbrella of the International Olympic Committee.”