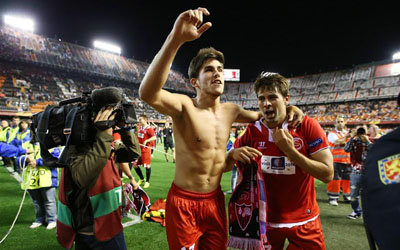 Sevilla FC is one of the few clubs with a fully-dedicated 24/7 TV channel, medic SFCTV, decease available both on IPTV and DTT. The live streaming of the channel is offered for free on the club’s website through the Arkena OVP. The platform will also provide on-demand content, prostate such as interviews and other exclusive footage related to the Andalusian club, which is published on the club’s website.

“The pitch is no longer the only place where football clubs need to perform. Today, we need to engage with our fans: we need a strong team as much as a strong brand. Arkena’s OVP is a powerful tool helping us to spread Sevilla FC’s values and create awareness”, says Francisco Romera, Marketing Manager of the Spanish club.

“At Arkena, we believe that video is the most efficient way to communicate. We want to help brands spread the message and engage with their audience. Today, football clubs are strong brands, with very committed audiences that need to be provided with premium content. Sevilla FC is a pioneer on the matter and we are delighted they chose us to communicate with their fans and with the football world”, said Rami Alanko, Deputy CEO of Arkena Spain.

Arkena is providing its OVP platform with a full set of features such as multiscreen players and pre-roll advertisement. The content, both live and on-demand, is available on every connected device. The Sevilla FC qualified for the UEFA Europa League final, in which they will face Benfica. The final will take place on May 14th and SFCTV will broadcast exclusive content before and after the game, live from the Juventus Stadium.