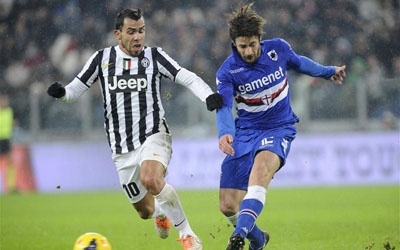 Serie A outfit Sampdoria has been bought by Film producer Massimo Ferrero from Edoardo Garrone.

Garrone made the announcement in a media conference.

“For reasons that you will understand later I couldn’t say it before,” an emotional Garrone told the assembled media.

“This Press conference is much more difficult for me than the famous relegation one.

“For 12 years I have had the honour to be able to say it’s as if we have saved Sampdoria twice.

“My father did it on January 11 2002, and I did it four years ago after relegation left a chasm within the club both in terms of finance and organisation.

“In these years at Sampdoria there have been sacrifices, bad moments and also some happiness. I have worked in the football world, a very difficult one to understand and a different one.

“We took on a commitment, first with my father and then with my family, to firstly guarantee the future of Sampdoria and then pass it on once we had found someone adequate.

“In three years of work I can say that Sampdoria are solid financially even though they have to work on their operating costs. They have a serious and transparent organisation, as they have had traditionally.

“According to our plans we will have balanced the books by the end of the year, as well as overseeing other projects like the new stadium and the refurbishment of the Bogliasco sports centre.

“Over these years we have looked around Italy and abroad to find someone who could take over from us well.

“Over seven years there were some people who put themselves forward but none of them were credible.

“Working day and night we have finalised this operation and only this morning the ownership was passed on.

“Samp now has a new owner and a new President will all of my support.

“I have taken the promise I made to my family and my father until the end, and now I pass it on to the new President of Sampdoria.

“I present to you Massimo Ferrero, cinematographic producer. ForzaSampdoria forever.”