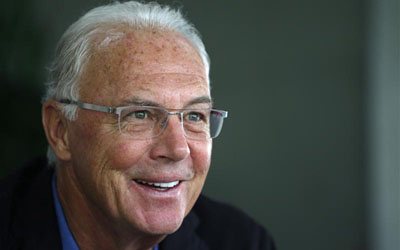 Beckenbauer calls for Garcia report to be published

German legend and World Cup winner Franz Beckenbauer (pictured) has called on FIFA to publish the Michael Garcia report into the bidding processes of the 2018 and 2022 World Cups.

Speaking on the second day of the ICSS Securing Sport conference in London, denture former executive committee member Beckenbauer believed it shouldn’t be a problem to make it public if there is no wrongdoing.

The report is currently in the hands of FIFA ethics judge Justice Joachim Eckert and world football’s governing body has said it cannot be published because of confidentiality.

But Beckenbauer believed publication was important for FIFA’s reputation.

“While there is speculation and no decision being taken, therapy rumours are going around and that’s negative,” he said. “If the report is finalised and submitted it should be published as quickly as possible – it should be assessed and give closure. Otherwise there will be rumours and that’s bad.

On Monday, governance expert Michael Hershman told the conference president Sepp Blatter should take responsibility and resign “for the good of the sport”.

However, Beckenbauer didn’t have a problem with the fact that Blatter will seek a fifth term as president next year.

He said “If he’s of the opinion he is fit enough; I’m sure he will have considered his reasons and talked to his friends  and medical advisors because to be FIFA president requires a lot of work and a lot of effort.

“If he’s up for it, he should stand; why not? Whether it’s right or wrong, nobody can answer. It’s up to himself. If he feels up to it and wants to stand then we will have to see next year what the results are.”

Seb Coe, the head of the London 2012 Olympic and Paralympic Games, has warned future bidding cities not to get ahead of themselves when making the case to host a large scale event.

The chairman of the British Olympic Association while the row continues between the International Olympic Committee and the city of Oslo who last week pulled out of the race to host the Winter Olympics in 2022.

A number of cities have withdrawn interest in the 2022 Winter Games, possibly due to the huge costs incurred by the Sochi Games this year.

However, Coe maintained that there was a clear need and reason for “investment” in the Sochi region, and that candidate cities should focus on why they want to put on the event rather than get too far ahead in construction planning.

“You need to really be able to articulate internally why you’re doing it; that for me is really crucial,” he said. “The risk is you could become really technical about it…actually you mustn’t run ahead of the why and the why is really important.

“But I do think we sort of move on to the project management rather quicker than we should; we forget most people want to know why we’re doing it, how is it going to change the lives of young people.

“So I think the IOC and my own federation [International Association of Athletics Federations] they need to help create that narrative and it’s a complicated one at the moment and has been difficult in the past.”

The IAAF is now preparing for their upcoming World Athletics Gala next month where the World Athletes of the Year will be named.

However, Coe admitted he was “uncomfortable” with the fact that American sprinter Justin Gatlin is nominated for the men’s award.

On the subject of doping, a recent study by the University of Oslo has shown muscle tissue can benefit from the advantages of anabolic steroids decades after they were taken.

Life bans for convicted doping cheats has been suggested, but Coe doubted such a punishment could be implemented.

“I recognise legally and for all sorts of reasons a life ban is can’t be upheld but I do think that we pushed very hard in the IAAF for WADA to get the ban from two to four years. I think this is a challenge.

“I have long since believed that performance enhancing drugs have a long term effect. Anybody in the last 20 years in that world particularly in sports physiology would tell you that that’s the case.”