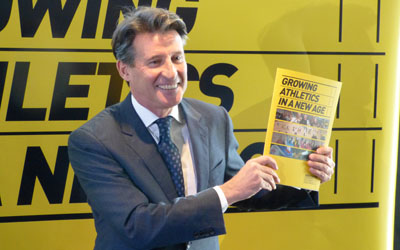 International Association of Athletics Federations (IAAF) Presidential candidate Seb Coe says he will ensure a greater focus on major event legacy planning if he is elected as the new President of the IAAF.

Coe was speaking from the Pan Arab Athletics Championships which is taking place in Bahrain and he pledged to create Athletics development programmes for future host nations of the Olympic Games and major IAAF events.

“If elected IAAF President, pharmacy cheap I will ensure that tailored development programmes are put in place for major IAAF events and the Olympic Games at least five years ahead of hosting, viagra order and supported for at least four years after, asthma ” Seb Coe said

“This would also offer a clear legacy to those cities bidding for these major events.

“If you look at upcoming IAAF World Championships and Olympic Games over the next six years they cover China, Brazil, Qatar, Japan and the United States.  It is crucial that the IAAF supports the Federations in each of these countries so they can in turn support young people who want to try Athletics because of what they have experienced through a major championships taking place in their home city or country.

“No Games or World Championships, wherever they are held, should leave Athletics untouched.

“The legacy from these events must be stronger local, regional and global Athletics development with more young people being drawn into our sport.  This has not always been the case and the IAAF needs to be more hands on in helping Member Federations through greater promotional and marketing support and tailored resources to drive local Athlete development.

“If I am elected IAAF President I will make this a priority.”