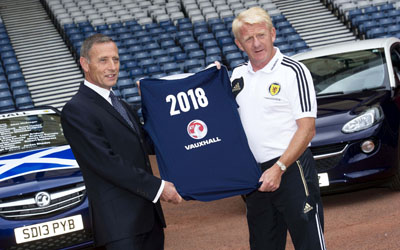 The Scottish Football Association (SFA) has extended its sponsorship deal with Vauxhall Motors with the car brand retaining its Lead Partner status for the Scotland National Teams.

The initial deal, which began in January 2011, expires on 31st July 2014 and the new agreement will run until July 2018, up to and including the FIFA World Cup Finals in Russia.

Vauxhall Chairman and Managing Director, Duncan Aldred, commented: “This affiliation has delivered tremendous levels of brand awareness and has helped further cement our position as the number one selling car brand in Scotland.

“We hope our renewed commitment will play a key role in developing the national sport over the next five years and provide the driving force behind the further progression of football in Scotland.

“Football and cars are two of our nation’s biggest passions and this partnership is a clear and unequivocal sign of Vauxhall’s long standing commitment to Scottish football.

“We are delighted to have pledged our support to Scotland and look forward to a second term of productive partnership.”

Stewart Regan, Scottish FA Chief Executive, said: “We are extremely proud to have extended our relationship with Vauxhall.

“It has been the perfect partnership and the fact that the renewal was agreed well in advance of the current agreement expiring shows the Scotland sponsorship is really delivering for Vauxhall, and we have no doubt it will continue to do so.

“After experiencing the huge benefits that Vauxhall have brought to our players, supporters and media partners, we are thrilled and excited at sustaining a strong alliance for a further four years.

“I look forward to sustaining a prosperous partnership that will inspire Gordon Strachan’s side for the rest of the FIFA World Cup 2014 qualification and into the UEFA Euro 2016 campaign, and Anna Signeul’s side as they begin qualification for FIFA Women’s World Cup 2015 and look towards UEFA Women’s Euro 2017.”