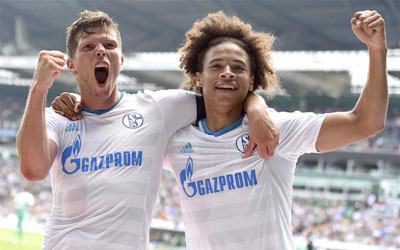 Schalke have announced the continuation of their partnership with Gazprom after talks between chairman of the supervisory board Clemens Tönnies and marketing director Alexander Jobst conducted final talks with GAZPROM chairman Alexej Miller at the end of April in St. Petersburg.

The Partnership will continue until at least 2020.

Clemens Tönnies said: “I’m really happy about continuing our collaboration until 2022. We’ve worked together closely for years now and this new contract will only expand this partnership,”

Alexander Jobst added: “With this long-term contract, GAZPROM will have a large contribution to FC Schalke 04’s financial stability,”

“This planning security with our most important partner is a milestone in our successful financial development. We will continue to expand our partnership, looking to engage in projects together in the Chinese market.”

The partnership between GAZPROM and FC Schalke 04 is one of the longest-running relationships in the Bundesliga.

GAZPROM has been S04’s main sponsor since January 2007 and have also featured on the Royal Blues’ kits since then.