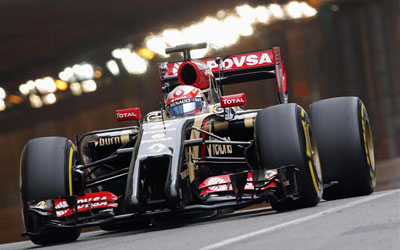 Saxo Bank, the leading online trading and investment specialist, have activated their partnership with Lotus F1 Team for the prestigious Monaco Grand Prix this weekend.

Saxo will expand on its branding of the team’s 2014 challenger, the E22, as driven by Romain Grosjean and Pastor Maldonado.

As reinforcement of the exposure and business-to-business opportunities Saxo Bank has enjoyed since becoming Lotus F1 Team Official Business Partner at the start of this season, the E22’s sidepods will feature the distinctive Saxo Bank logo for the Monaco Grand Prix highlighting the bank’s partnership with the team.

Lars Seier Christensen, co-CEO and co-founder of Saxo Bank, has said: “At Saxo Bank, we are proud to be supporting the entire Lotus team, especially Denmark’s very own Marco Sørensen, the official Lotus F1 Reserve and Development driver. Lotus is one of the most iconic and successful marques within global motor racing, and the Monaco Grand Prix is the perfect platform upon which to exhibit the Saxo brand.”