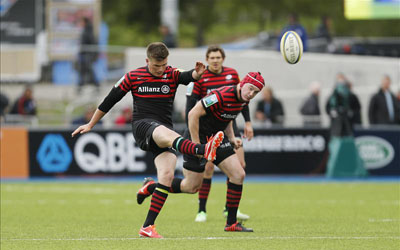 Rugby club Saracens and Allianz have announced a deal to extend their partnership until at least 2021.

The organisations’ original six-year deal was announced in July 2012 and this was followed by the official opening of Allianz Park as the club’s home ground in January 2013.

The home of Saracens is part of Allianz Group’s family of stadiums which currently includes seven stadia around the world; growing to eight in 2019.

Jon Dye, CEO of Allianz Insurance, said: “There is an excellent cultural alignment between ourselves and Saracens, so I am delighted we are continuing our relationship.

“We are both achieving considerable success in highly competitive environments and our shared belief that this is only achieved through our people is another example of the good fit that exists between us.”

Saracens Chairman, Nigel Wray, added: “We are delighted to renew our sponsorship and indeed our partnership with Allianz, one of the world’s great companies, who share our values and our desire to really mean something in our community. There’s so much more to do and with Allianz we will be doing it.”

News | @Saracens and @allianzuk are delighted to announce that their successful partnership will continue until at least 2021.