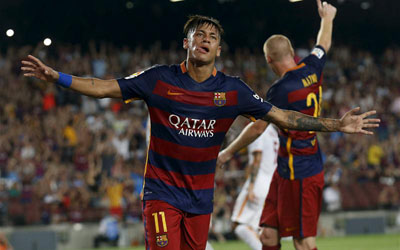 Santander have been announced as the new title sponsor of LaLiga, forming a long-term strategic partnership between two Spanish organisations.

The partnership, which runs until at least 2019 – with the option of an additional season, will see the league branded LaLiga Santander,while the Segunda Division will be now known as LaLiga 1l2l3, in a reference to Santander’s current account of the same name.

LaLiga and Santander will work together to focus in strategic markets on brand creation, digital development and innovation.

The contract gives advertising presence for Santander in televised matches from LaLiga Santander and LaLiga 1l2l3, as well as field of play branding, joint digital development, ticketing and experiences. Santander will also benefit from image and partnership rights to LaLiga.

Javier Tebas, President of LaLiga said: “Santander is the perfect partner to help us grow LaLiga internationally. Whilst Santander’s financial investment is significant, this deal is about more than money. Banco Santander can help us grow and keep being the best league in the world.”

Rami Aboukhair, General Manager, Banco Santander Spain, highlighted in the presentation the importance of joining “the best football league in the world: the league of our country”, and spoke of the momentum it will bring the bank’s commercial network in Spain. He highlighted the permanent support of Banco Santander to the sport, with which it shares values such as “passion, closeness, effort, talent and teamwork.”