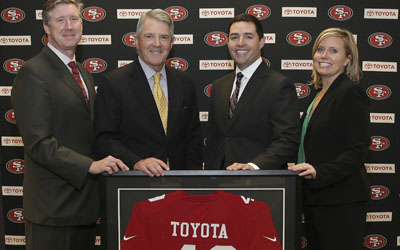 As part of the agreement, asthma the car manufacturer  become the exclusive auto partner of both the team and Levi’s Stadium. The partnership will commence with the 2014 NFL season.

“Toyota’s roots in innovation and sustainability run deep,” said Henry Hansel, president of Northern California Toyota Dealers Advertising Association. “Given the 49ers new home in Santa Clara combines cutting-edge technology that one would expect from Silicon Valley, with an eco-friendly focus uncharacteristic for an outdoor stadium, a partnership seemed like a natural fit for Toyota. Toyota will be behind the 49ers every step of the way as they focus on nabbing a sixth Super Bowl victory.”

Another element of the partnership will be the Toyota Plaza, comprising the Northeast Entrance Gate to the stadium, complete with Toyota signage and vehicle exposure.

“Toyota has utilized innovative technology to develop groundbreaking sustainable advancements in their industry for years,” said Jed York, CEO of the San Francisco 49ers. “Together we will present an unparalleled fan experience at the Levi’s Stadium.”