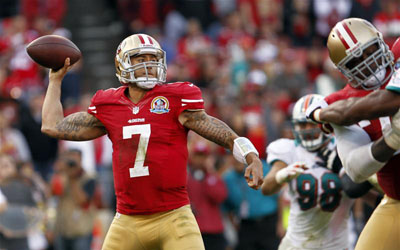 As part of the relationship, Kaepernick will represent MusclePharm in a series of advertisements, radio and television appearances, and social media outlets.

Kaepernick is considered one of the fastest raising stars in the NFL. Drafted in 2011 in the second round by the San Francisco 49ers, Kaepernick became the team’s full-time starter in the middle of the 2012 season leading the 49ers into the NFL playoffs. In his first career postseason start, he put forth an electrifying performance against the Green Bay Packers setting an NFL single-game record for most rushing yards (181) by a quarterback. After beating the Atlanta Falcons in the NFC Championship, he led the 49ers to their first Super Bowl appearance since 1994 against the Baltimore Ravens.

Commenting on the announcement, Kaepernick stated, “I added MusclePharm supplements to my routine at the beginning of my rookie season in the NFL. MP covers all my needs when it comes to energy, recovery and increased productivity both on and off the field. I am honored to become part of the MusclePharm team and look forward to representing their highly regarded brand.”

Commenting on the announcement, MusclePharm Founder & CEO, Brad Pyatt, stated, “Kaepernick’s reputation as a workout fanatic coupled with his amazing physique makes him an ideal fit with the MusclePharm brand. He is both an articulate and charismatic young man with a work ethic and competitive drive that complement his dynamic athleticism. We are thrilled to have him represent MusclePharm.”