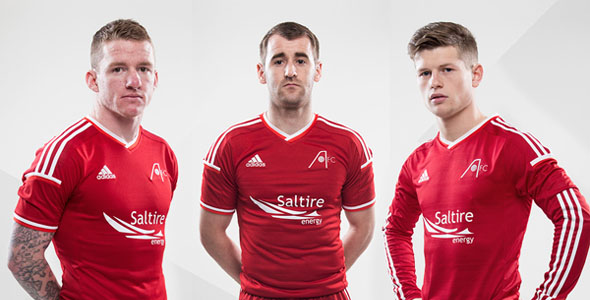 Scottish Premiership team Aberdeen FC have expanded their deal with Saltire Energy with the energy company becoming the club’s shirt sponsor for a three-year period.

Also revealed is the new home kit that the team will wear for the 2014-15 campaign, incorporating the latest adidas styles and materials.

Commenting on the deal, Pittodrie Vice Chairman George Yule said. “We are absolutely delighted to have secured this partnership with Saltire Energy, an organisation that already enjoys a close relationship with the club through supporting of several initiatives over the years. In addition to Saltire’s involvement with the senior squads, they are also going to support all of our youth development teams which of course are where many first team stars of the future can currently be found.

“I would also like to take this opportunity to thank Terry Allan and Team Recruitment for their fantastic support over the past six years, which has been very much appreciated.”

Established in 1986, and headquartered in Portlethen Aberdeen, Saltire Energy is a leading supplier of state-of-the-art drilling equipment to the global oil and gas industry.

Mike Loggie, Saltire Energy CEO added: “I am thrilled that Saltire Energy will be building upon an already successful relationship with AFC. Saltire Energy has supported the youth teams at the club for a number of years and this move is very much a natural progression for us.

“I am a long-standing fan of the club and admire the way they perform both on and off the pitch. AFC’s significant involvement in the community is also reflective of Saltire Energy’s commitment to the local area. When we heard that there was an opportunity to become the official sponsor for AFC we were keen to take over this prestigious title and strengthen our involvement with the club.

“AFC is steeped in tradition and we are proud to be associated with the club and see the Saltire Energy brand on the new kit, which looks great. This is such an exciting time for AFC – I am really looking forward to watching the club’s run of success continue into next season and beyond.”