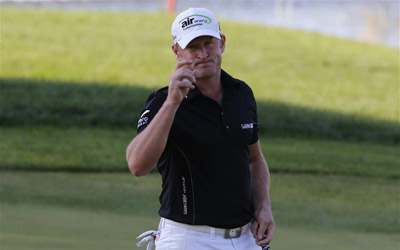 Golfer Jamie Donaldson, ampoule who will make his debut in the Ryder Cup next week, see has agreed an endorsement deal with TaylorMade Golf.

The multi-year agreement will also see the Welshman use a TaylorMade staff bag and Tour headwear.

During the 2014 season, cough | Donaldson has consistently been in the Top 30 of the Official World Golf Rankings thanks to several high profile finishes, including a second place at WGC – Cadillac Championship in March and a recent victory at the 2014 Czech Open. These successes come on the back of victories in both the 2012 and 2013 seasons in which Donaldson finished strongly in the European Race to Dubai gracing the Top 20 and Top 6 respectively.

Ian Watts, Director Sports Marketing Europe, commented: “We’re delighted to welcome Jamie on board. Over the past few seasons he’s been one of the most consistent performers on the European Tour and his career statistics speak for themselves, with close to 40 Top 10 finishes since gaining his card. We know that Jamie will be a fantastic ambassador for our brand and look forward to a lasting partnership over the coming years.”

Of the partnership Jamie said: “I’m very excited to be working with TaylorMade Golf. The right equipment is essential to me and having the backing of TaylorMade’s Tour team along with the industry’s best driver and fairway woods made it an easy decision for me, as I endeavour to take my game to the next level.”

Donaldson’s first event as an official TaylorMade-adidas Golf ambassador will be the Volvo World Match Play, where he will be in search of his fourth European Tour victory.