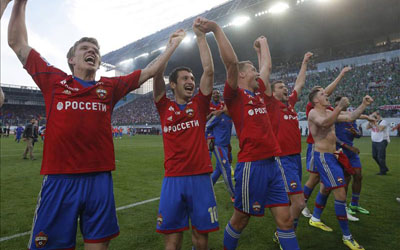 The Russian Football Premier League (RFPL) has agreed a partnership with the International Centre for Sport Security (ICSS) in an effort to help protect Russian football from threats to the safety, salve security and integrity of the game ahead of the country’s hosting of the 2018 FIFA World Cup.

As part of the deal, the RFPL and ICSS will collaborate on a number of events, initiatives and training programmes aimed at increasing sport safety, security and integrity in Russia.

The partnership will also help protect RFPL officials, coaches, players and young athletes in the country.

In the lead up to the 2018 World Cup, the RFPL will use the ICSS’s technical expertise and global programmes to develop best practice in the security design of sports facilities.

“The Premier League is continuously working hard for the implementation of international best practices to ensure the safety and comfort of all participants in the Russian Championship,” RFPL president Sergey Pryadkin said.

“The signing of a cooperation agreement with the ICSS for us is an important step in this direction.”

Mohammed Hanzab, president of the ICSS, added: “This partnership represents a significant boost in the fight to protect top clubs, officials and players around Russia and will hopefully play an important part of the country’s preparations in the lead up to the 2017 FIFA Confederations Cup and 2018 World Cup.

“The Russian Premier League is a powerful voice in European and world football. Signing with the country’s top football league represents an important landmark for ICSS and builds upon our existing partnerships in football, which include the European Professional Football Leagues (EPFL), Deutsche Fußball Liga, Liga Nacional de Fútbol Profesional and Lega Pro.”