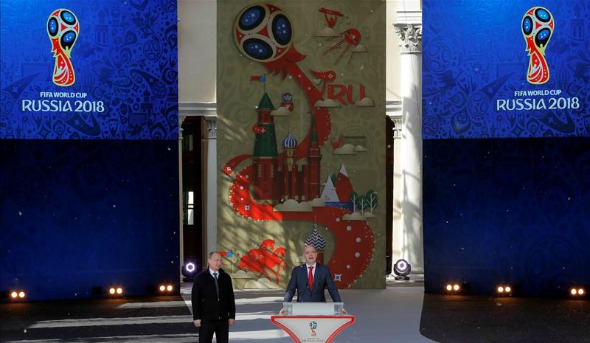 The Russia 2018 team have said they’ve learned lessons from watching the European Championships in France – particularly in regard to security and the quality of the pitches.

The 2018 organising committee took the chance to observe the last major international tournament before their own event.

Many commentators criticised the handling of the security in France, which led to several groups of fans fighting, both in and out the stadiums.

Deputy CEO of Russia 2018 Alexander Djordjadze admitted this was one of the main lessons his team would take away from France:

“Every tournament gives an opportunity to learn something. France was a good example for us, in many respects, mainly in operational matters. Of course security will be taken to a higher level, after what we saw there. From a technical point of view, I think it is a good tournament in France, we had our experts in France, in all the stadia. Maybe the pitches will be emphasised as a very important aspect in the organisation of the World Cup. Certainly France was a good example for us.”

The pitches in France were a concern for UEFA, which will be noted by Russia. Tournament director Martin Kallen admitted they were not good enough.

“The pitch is tricky. It takes a great deal of technology and time to grow a good pitch. Russia is a northern country, so we have to take special care of that subject.”

Overall though Djordjadze said they looked in good shape for the tournament. With the last World Cup in Brazil going to the wire in order to be ready on time, Djordjadze allayed any fears of a repeat.

“Preparation is going fine. We are in the final stages of the preparations of the infrastructure. The facilities and the stadia are all coming along well. So we’re confident we’ll be on time, meeting all the schedules, no worries about that.”

“The World Cup is the biggest sports event in the world. Russia has long wanted to host it, now it’s coming in two years, the country is excited, believe me! We had a volunteer launch just a month ago. In just one month we had 60,000 applications from 175 different countries all around the world. The excitement is big, not just in Russia, but all around the world, it will be a great tournament for sure.”

With Russian sport suffering from a doping crisis, and the football team from poor performance at Euro 2016, Djordjadze and his team will be looking to make sure that the country hosts a tournament that will improve Russia’s standing in the sporting world.